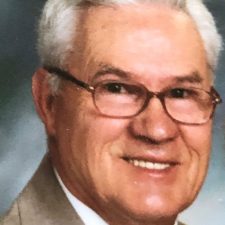 With heavy hearts and much sorrow felt by his family, William (Vince) Konsavage, 89, of Wilkes-Barre, passed away on Friday, September 20th, in Residential Hospice at Geisinger South Wilkes-Barre.

He was born in Wilkes-Barre, a son of the late Frank and Tillie Konsavage.  Vince attended G.A.R. Memorial High School.  Prior to his retirement in 1995 he was employed for many years with Inter Metro Industries.

He was an outdoorsman, who loved to hunt and fish.  Vince was also an avid bowler having bowled 5 perfect games. One of his passions was to bake pies for all of his family and friends for birthdays and special occasions.

During his lifetime, Vince met everyone with a smile on his face and a joke on his lips. He was instantly liked by everyone he met.

In addition to his parents, he was preceded in death by his sisters, Vera Sofa, Helen Konetski, Marian Poris, Ramona Kashuba and Emma Shorts.

A Mass of Christian Burial will be held on Tuesday at 10 am in St. Nicholas Church, 226 S. Washington Street, Wilkes-Barre.  Family and friends attending the Mass are asked to go directly to the Church on Tuesday.  Interment will be in Holy Trinity Cemetery, Bear Creek.

Family and friends may call on Monday from 5 -8 pm at the Nat & Gawlas Funeral Home, 89 Park Avenue, Wilkes-Barre.

In lieu of flowers, memorial donations may be made to St. Jude Children’s Research Hospital, 501 St. Jude Place, Memphis, TN 38105 or to the charity of the donor’s choice.

Online condolences may be sent by visiting Vince’s obituary at www.natandgawlas.com.