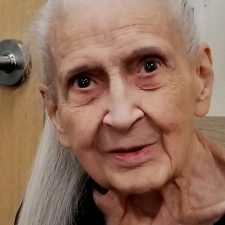 Wilma Beatrice Masher, 93, better known by friends as BB, of Plains Township, passed away on Wednesday, July 31, 2019, at Guardian Healthcare & Rehabilitation Center, Nanticoke, who took outstanding care of her in her last few days of life. She lived with her son, Joseph, for ten years up until the last seven days of her life. Her son, Joseph, and her daughters , along with her nurse’s aides take comfort in knowing they were able to care for her at home.

She was born in Exeter, a daughter of the late Frank and Veronica Roman Chupka. Wilma was a graduate of Exeter High School. She was formerly employed as a secretary in New York City. She later worked as a seamstress and embroiderer in the local garment industry.

Funeral services will be held on Tuesday at 9:30am from the Nat & Gawlas Funeral Home, 89 Park Avenue, Wilkes-Barre, with a Mass of Christian Burial to follow at 10am in Ss. Peter & Paul Church, 13 Hudson Road, Plains, PA. Interment will be in Mount Olivet Cemetery, Carverton.

Online condolences may be made by visiting Wilma’s obituary at www.natandgawlas.com.